It can sometimes get to be very confusing for advertisers and agencies to implement mobile video advertising in this digital advertising landscape that is rapidly picking up pace. However, it’s really all very much about understanding the mobile video market, and making an effort to understand how mobile video works.

To help you get into your advertising-with-mobile-video game, we’ve come up with this list of mobile video advertising formats for you to choose from next time you decide to pursue a mobile advertising campaign.

Watch Reebok’s FreakShow Be More Human Commercial to see how a video endeavor doesn’t always have the word “ad” imprinted on its forehead. You’ll probably start to love Reebok a little bit more after watching the ad, that’s how good it is, period.

Time on mobile devices is mostly spent in applications, and apps command 86% of the average US mobile consumer’s time, which makes banner ad units a go-to option. Banner ad units can be interactive or expandable.

Interactive banners require user action to activate the ad, such as when a user is encouraged to click on it when engaged in playing a game.

Expandable banners are rich media ads that come with an expansion feature, which means they expand in size when users rollover or click on the mobile ad unit. 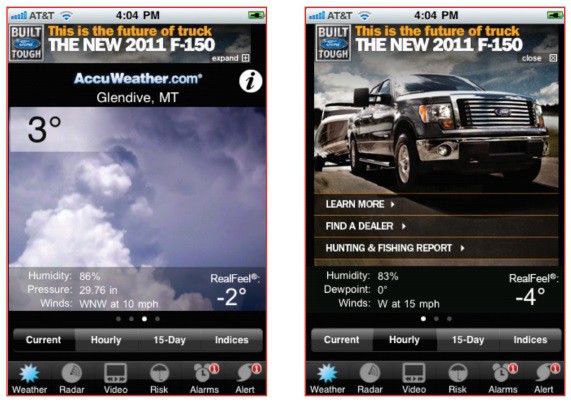 Interstitials (meaning in between) are banner ads taken to a completely new level. Unlike conventional banner ad units, interstitial advertising is more eye-catching due to graphics and most likely to be clicked. There are prestitial ads, which display to a site before the homepage, and interstitials, which display between two content pages. Both are large, taking up the entire screen and run once per day for every unique visitor.

Hot topics for many advertisers, native ads are considered to have the minimum level of intrusiveness in mobile video advertising. Native advertising runs within content streams, and these ad units display relevantly to the content and in the flow of the content so that they match the appearance of the app where they run.